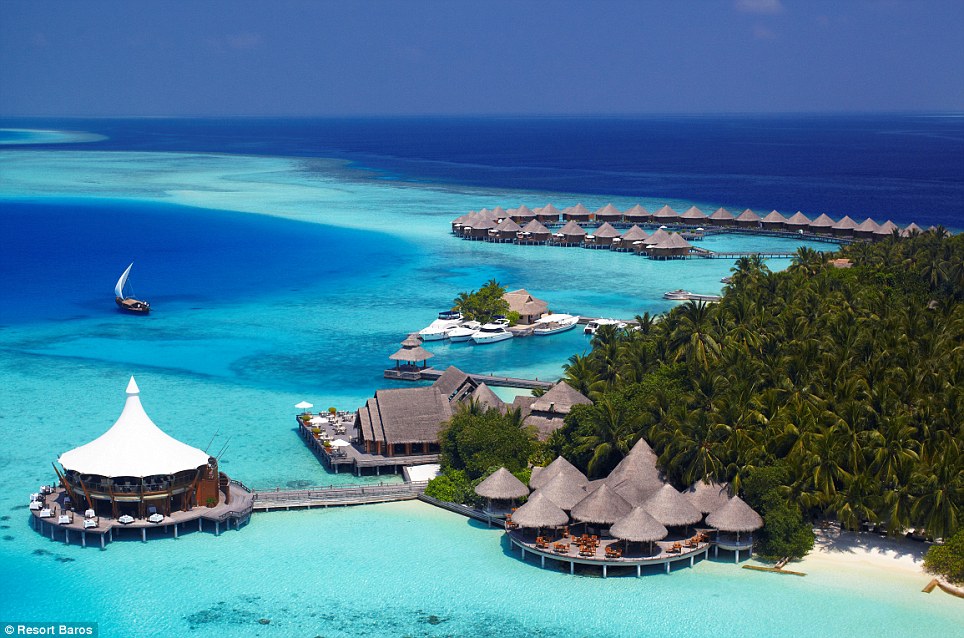 First place: The Maldives, long seen as one of the most romantic places in the world to go on holiday still stuns visitors with its crystal clear waters, white sand beaches and impossibly blue sea and sky. 'High scores across the board' from Conde Nast Traveller readers pushed this destination up from third place into pole posiition this time around 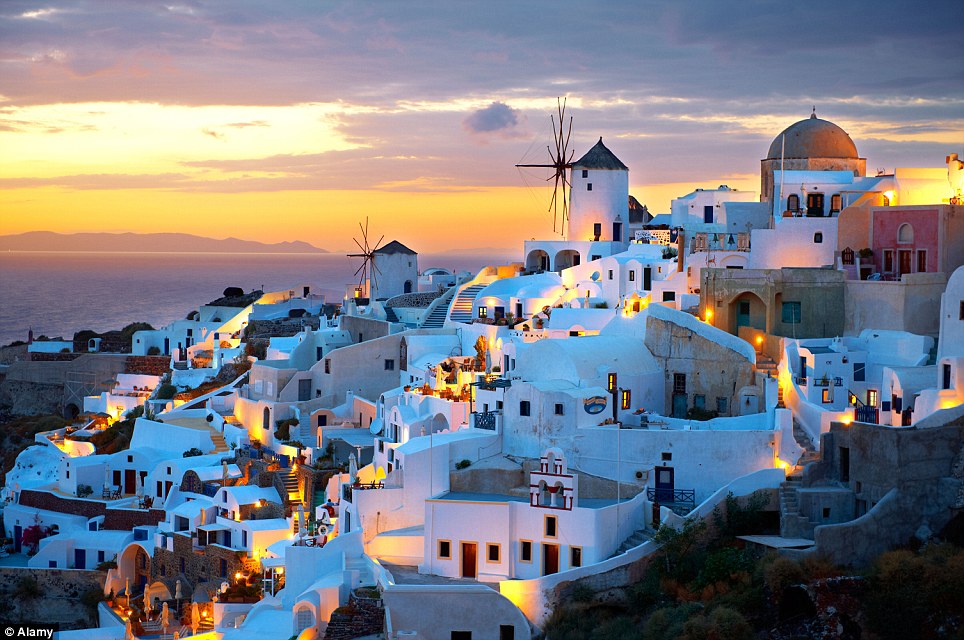 Second place: The Greek Islands are extremely popular among both Greek and foreign visitors thanks to their wonderful climate, hospitality and short distances between ports and stunning villages such as Santorini, pictured. Some of the oldest European civilizations developed on the Greek islands and unique archeological sites abound. Conde Nast readers mentioned the warm welcome meted out by friendly locals as a deciding factor too 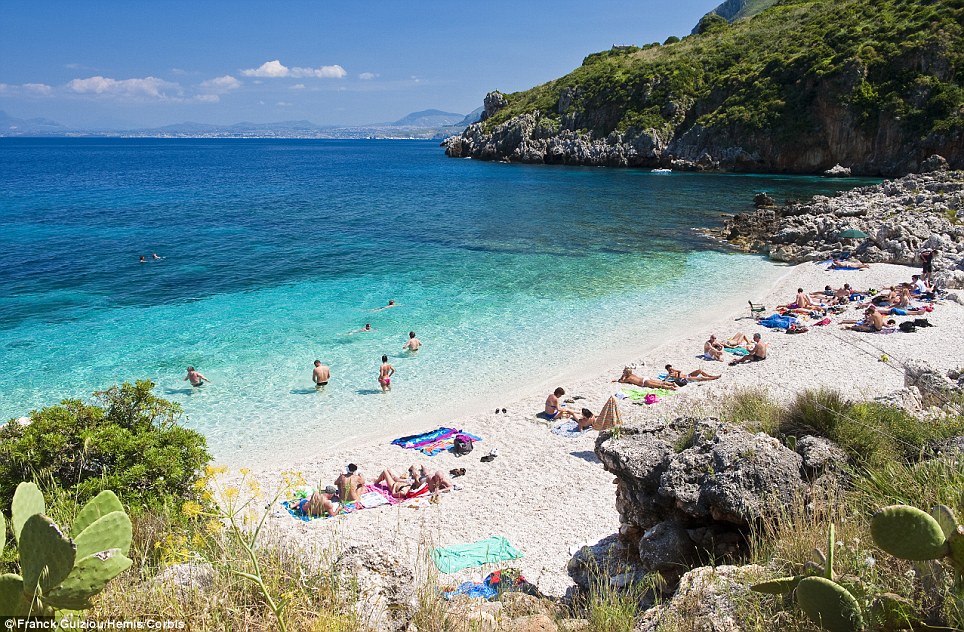 Third place: Sicily (pictured here the coastline near the nature reserve of Zingaro) is the largest island in the Mediterranean, but still boasts some of the finest beaches, turquoise waters and soft beaches often attributed to smaller islands. Mount Etna is another huge attraction, being one of the most active volcanoes in the world 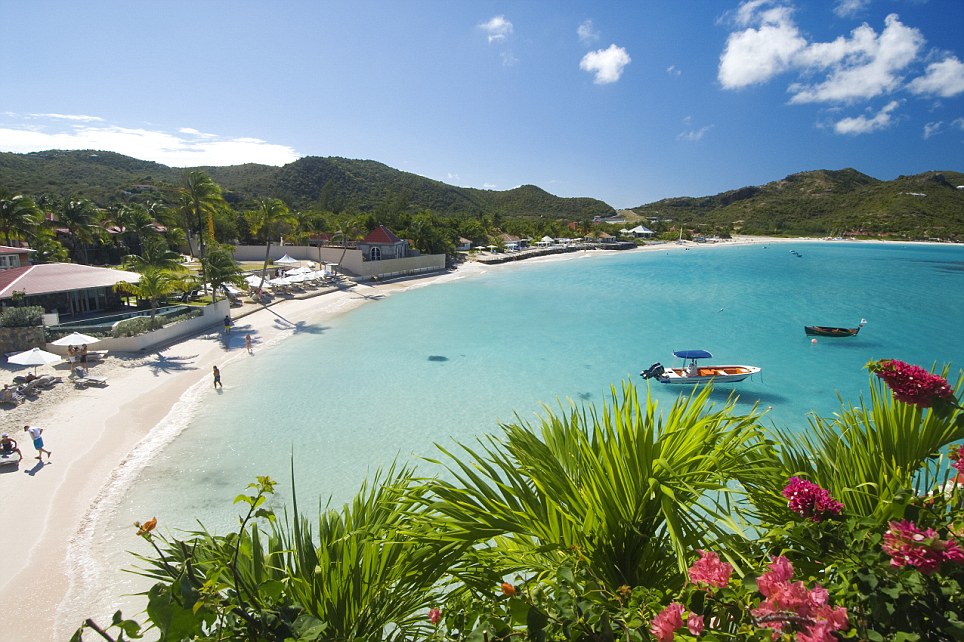 Fourth place: The Caribbean's most elite, most expensive island St Barth's - short for Saint-Barthélemy - lives up to its reputation as a place where the rich and famous gather to drink champagne. But its uncrowded white-sand beaches and distinctly Gallic air ensure it's a favourite with lesser mortals as well 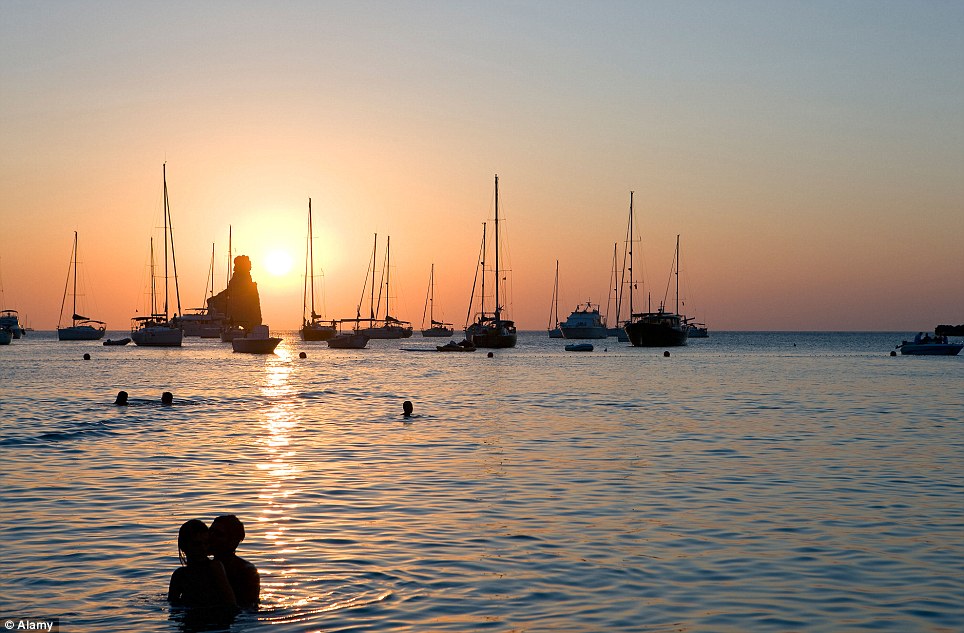 Fifth place: The Balearic Islands, formerly in the number one spot, are made up of four main islands all with a very different flavour. Ibiza (pictured here, Benniras beach) known for its thumping nightlife also has a calmer, traditional side, and its sisters Majorca and Menorca are equally beautiful, with lush green countryside as well as great beaches and pretty little villages along a stunning coastline 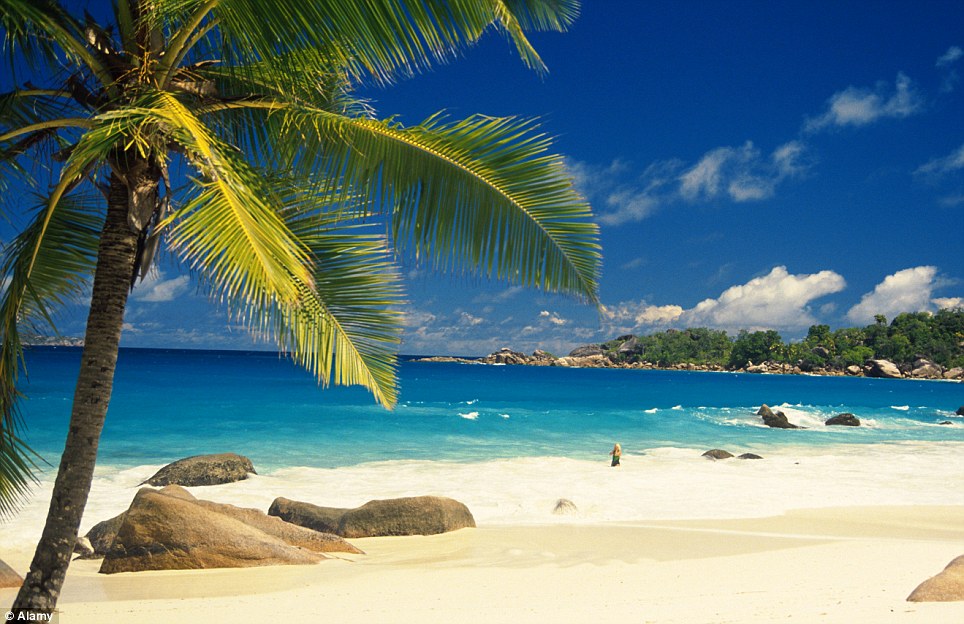 Sixth place: She sells seashells... The Seychelles, a longtime favourite of Conde Nast readers, is an otherworldly archipelago of 115 islands in the Indian Ocean. A trip to the Seychelles promises breathtaking natural beauty in pristine surrounds still untouched by man. With no less than two UNESCO World Heritage Sites - the Vallée de Mai on Praslin where the Coco-de-mer nut grows high on ancient palms, and Aldabra, the world's largest raised coral atoll 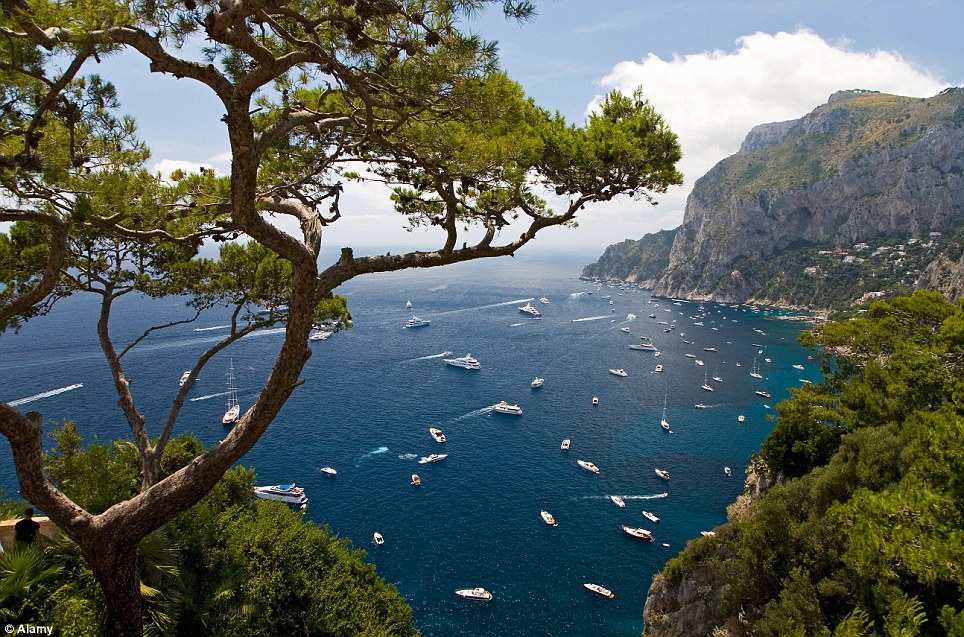 Seventh place: Luxuriant, extraordinary, and with a mild climate. Capri, just off the coast of Italy south of the bay of Napoli, has been visited over the centuries by intellectuals, artists and writers enthralled by its beauty. Visitors speak in glowing terms of its mix of history, nature and culture, and the exclusive feel of some of its busy ports is counteracted by a host of smaller harbours accessed only by boat. One of Italy's sparkling jewels 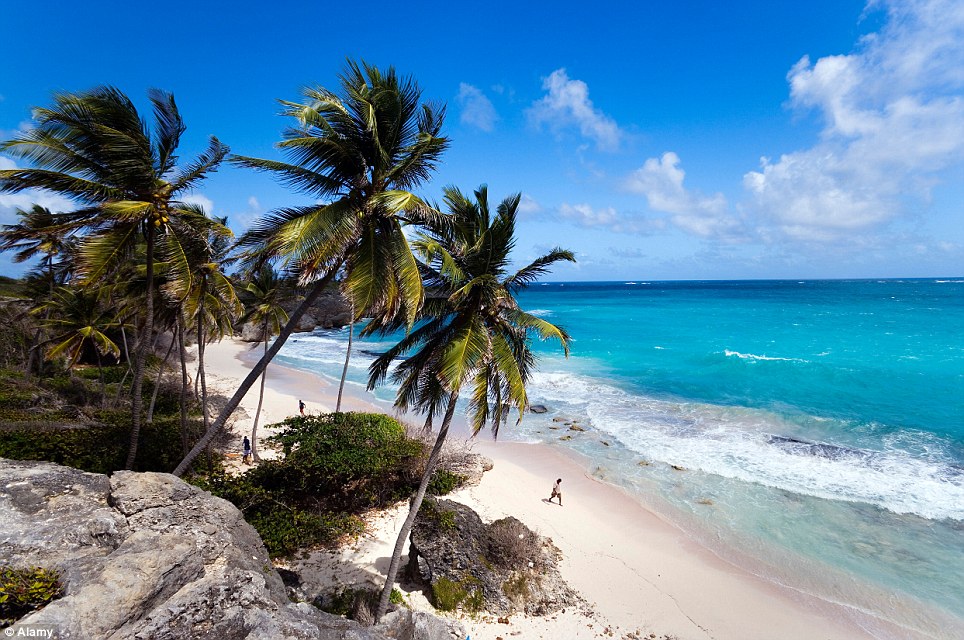 Eighth place: Lush tropical greenery, warm blue waters and golden sunlight. In Barbados you can spend the day on any number of white sandy beaches; eat some flying fish; drink some rum punch. In Barbados you can generally trade in the chaotic rush for the slow and easy while soaking up the natural beauty of this subtropical island 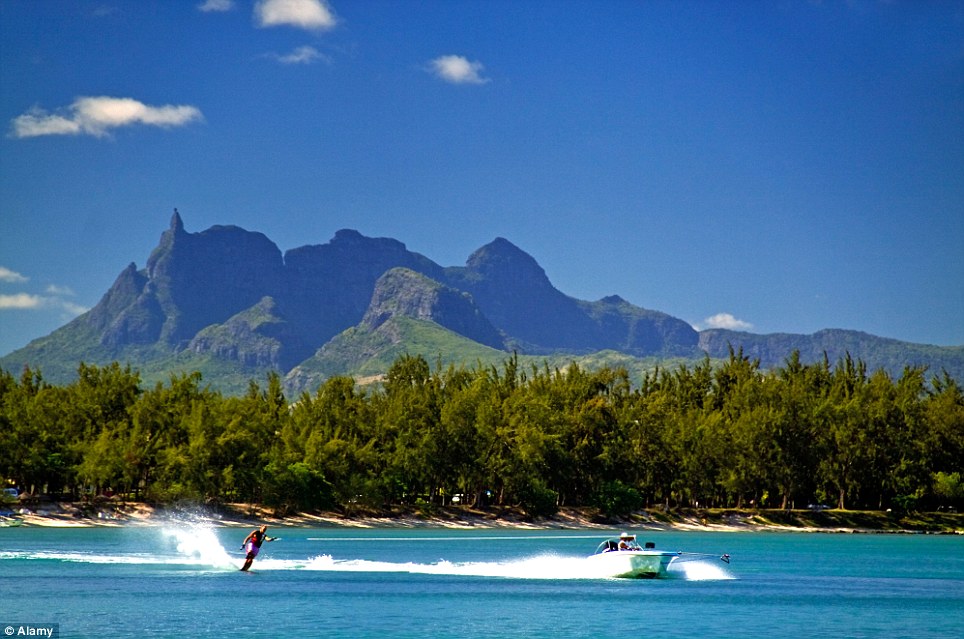 Ninth place: The warm welcome and the island's safe beaches and gentle seas make Mauritius a great place for a family getaway as well as a romantic destination for couples. Deserted beaches wrap themselves around the island, and large lagoons lined with fine white sand seem the embodiment of paradise. Mauritius is a country of poets, writers and artists, inspired not only by the stunning natural landscape, but also by its multicultural identity 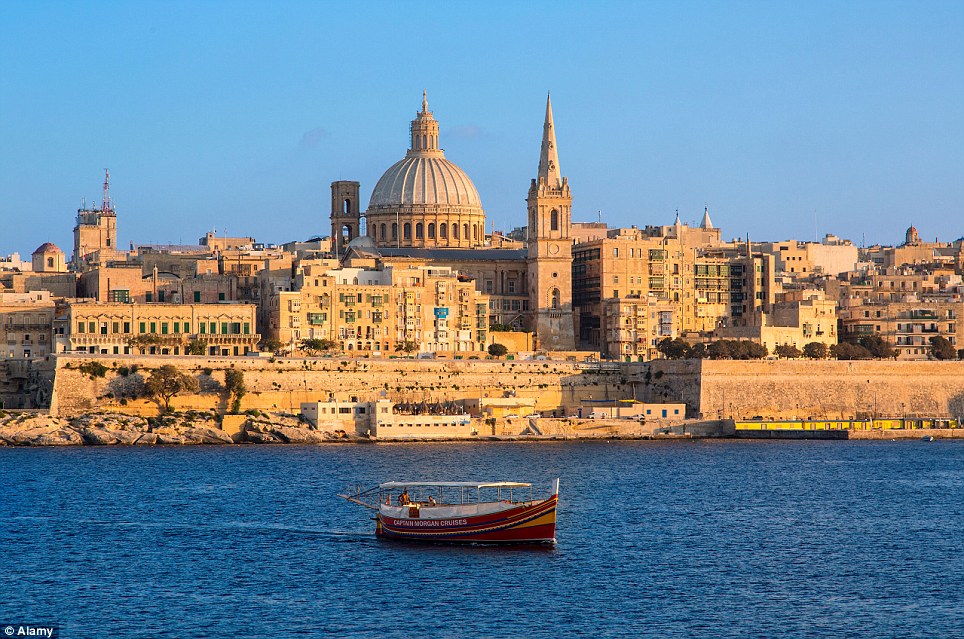 Tenth place: Malta is a popular tourist destination with its warm climate, numerous recreational areas, and architectural and historical monuments, and the island has no fewer than nine UNESCO World Heritage sites. Its capital, Valletta (pictured) is the smallest capital in the European Union as well as being famous for the beauty of its Baroque palaces, gardens and churches